The Miraculous Icon of Saint Barbara in London, England

This is a miraculous icon of Saint Barbara which currently is in Harrow, London. It belongs to a Greek family from Egypt who has had it for generations. It was handed down to them while living in Alexandria, travelled with them during a pilgrimage to the Holy Lands, and when they decided to move to England they now reside in London where this icon has become well-known among the Greeks and even non-Greeks.

On the feast of the Saint (December 4), many pious faithful are welcomed into the home of this family. A priest also comes to chant a Supplication Service. At the end of the Service, the priest anoints the faithful with oil from the vigil lamp that remains lit at all times in front of the miraculous icon.

This icon worked many miracles in Alexandria and continues to do so in London. It saved a sick child that was near death in Alexandria. It made cancer in a sick woman of London disappear. It even helped to heal a woman with cancer in the United States, and gave strength to a young girl in Greece after Saint Barbara herself appeared to her. It has given strength and healing to many throughout the world who venerated her icon with faith and reverence.

The Miraculous Icon of Saint Barbara in Nauplion (or Nafplion), Greece

In the Church of Saint Spyridon, within the nave of the church, on the left proskynitarion, stands the miraculous icon of Saint Barbara. It was painted by Anthony Barou in 1897, at the expense of the faithful women of St. Spyridon parish.

In 1928 a deadly plague swept through Nauplio. At that time, when all hope seemed to be lost and no medicine existed to heal the people, the faithful fled to the icon of Saint Barbara with tears and made a procession with the miraculous icon throughout Nauplion to stop the deadly epidemic. Saint Barbara heard their prayers and the deadly plague immediately ceased. In gratitude, every year on the feast of Saint Barbara, a procession is held with this same icon to commemorate this miracle following the Great Vespers on December 3.

The Miraculous Icon of Saint Barbara in Zakynthos, Greece

The island of Zakynthos holds a special reverence for Saint Barbara due to a miracle attributed to her by the faithful. Periodically throughout the 18th century residents of the island suffered through various small pox epidemics. On March 26, 1795 the Venetians gave the faithful Orthodox permission to process with the icon of Saint Barbara of Krokou in the suburb of Kipon. Immediately followig the procession, the small pox epidemic ceased. Following this miracle, many icons of Saint Barbara were sponsored by the faithful to be placed in various churches throughout the island, since she proved to be their protector and healer.

The Miracle of Saint Barbara in Drama, Greece

According to local tradition, in 1380, when the Ottomans took Drama, they destroyed a church dedicated to Saint Barbara next to a lake (named after St. Barbara) and desired in its stead to build there a mosque. On the feast of Saint Barbara, December 4, the region where the building of the mosque was taking place flooded. It flooded to the point where construction became impossible and the building of the mosque was abandoned through the miraculous intervention of Saint Barbara on her feast day. The ruins of the mosque can still be seen under the water. The chapel that exists today to St. Barbara is built on the lake and the bell tower is built where the old church is said to have existed.

On the feast day of St. Barbara, following the procession with the icon and Great Vespers, all the little girls of the area gather with lit candles on the eastern side of the lake where the old church used to be, and pray that St. Barbara protect them and give them health. Some place the candles on a plank of wood which they allow to float on the water, others place them in small boats. Following the festivites, which sometimes go through the night, families gather in their homes and eat a warm “barbara”. This is a traditional food named after St. Barbara which is like a honey cake. According to tradition, the father of St. Barbara tainted all the bread with poison to extermintate the Christians, but St. Barbara notified them of this and told them to make bread with whatever they had in their homes. This is where the tradition of the “barbara” cake comes from. The next day the girls gather again at the lake and take some of this water as Holy Water and proceed to the Divine Liturgy. St. Barbara is a special protector of girls.

For a video of the lake, see here.

The Miracle of Saint Barbara in Rethymno, Crete

Where the current church of Saint Barbara stands today stood an older church dedicated to her from Roman times. Some time during the Turkish occupation the following miracle took place.

In 1833 a rich Turk, Ali-Tsitsekaki, who resided in Rethymno, bought the church in order to destroy it to build stores and houses. The location of the church he specifically wanted to make into a large bath house. To this the christians protested and bought back the property for 500 golden franks. After this the church was built, decorated with icons, and renewed. The dedication of the church was officially made on December 14, 1885. The icon of St. Barbara in the proskynitarion was painted in 1894 by A. Vevelaki. In 1898 the dome was painted by Bishop Hieortheos Braouakis after he fasted for two weeks.

More can be read about the veneration of St. Barbara in Rethymno here, here, and here.

The Relics of Saint Barbara

In the sixth century the relics of the Holy Great-Martyr Barbara were transferred to Constantinople. Six hundred years later in the twelfth century, they were transferred to Kiev (July 11) by Barbara, the daughter of the Roman Emperor Alexios Komnenos, who married the Russian prince Michael Iziaslavych. Initially the relics of Saint Barbara rested in St. Michael’s Golden-Domed Monastery in Kiev where they were brought in 1108 by Sviatopolk II Iziaslavych’s wife and kept in a silver reliquary donated by Hetman Ivan Mazepa. Starting from the late seventeenth century the apolytikion honoring St. Barbara was sung in the Cathedral of the Monastery on each Tuesday just before the Liturgy. In 1870, about 100,000 pilgrims paid tribute to St. Barbara at St. Michael’s Monastery. Before the Russian Revolution in 1917, rings manufactured and blessed at St. Michael’s Monastery, known as St. Barbara’s rings, were very popular among the citizens of Kiev. They usually served as protectors and, according to popular beliefs, occasionally protected against witchcraft but were also effective against serious illnesses and sudden death. These beliefs reference the facts that the Monastery was not affected by the plague epidemics in 1710 and 1770 and cholera epidemics of the nineteenth century.

In the 1930s the relics of Saint Barbara were transferred to St. Vladimir’s Cathedral in the same city. This was done before the destruction of St. Michael’s Golden-Domed Monastery by the Bolsheviks. Until World War II St. Vladimir’s served as a museum of religion and atheism. After the war the cathedral was reopened and since remained continually open. It was then the main church of the Kiev Metropolitan See of the Ukrainian Exarchate. The cathedral was one of the few places in the USSR where tourists could openely visit a working Orthodox Church. It saw the revival of Orthodox religion in 1988 when the millennium celebration of the Baptism of Kiev marked a change in Soviet policy on religion. After the dissolution of the Soviet Union, St Vladimir’s Cathedral ownership became an issue of controversy between two denominations that both claim to represent the Ukrainian Orthodox Christianity – the Ukrainian Orthodox Church, a church with an autonomous status under the Moscow Patriarchy, and the newly established Ukrainian Orthodox Church – Kiev Patriarchy, which, ultimately, won the control over the cathderal.

An Akathist to the Saint is served each Tuesday before her holy relics.

For pictures of the feast of St. Barbara in Kiev, see here.

Other portions of her relics were distributed in various places from Constantinople. See here for example.

Skull of St. Barbara in the Monastery of Mega Spelaion in Kalavryta, Greece

Many pious Orthodox Christians are in the habit of chanting the troparion of St. Barbara each day, recalling the Savior’s promise to her that those who remembered her and her sufferings would be preserved from a sudden, unexpected death, and would not depart this life without benefit of the Holy Mysteries of Christ.

Apolytikion in the Fourth Tone

Let us honor the holy Barbara for, with the aid of the Cross as her weapon, she crushed the snares of the enemy, and was rescued from them like a bird.

Kontakion in the Fourth Tone

O noble Champion, following God who is reverently praised in Trinity, you abandoned the temples of idols. Struggling amid suffering, O Barbara, you were not overwhelmed by the threats of the tyrants, O brave One, even singing aloud, “I worship the Trinity, the one Godhead.” 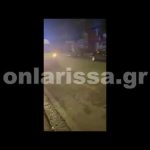 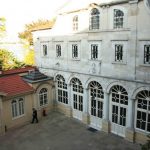